First of all, I wasn’t the most normal kid. My family and I lived in a house that was off by itself. I had two brothers. They were my best friends and sometimes my only friends. One of my brothers had special needs and my other brother happened to be gay, but I was definitely the weird one. I decided to blog a little bit about that time in my life and crazy things I thought when I was little.

As a kid, I was both intrigued and horrified by the world in equal parts. At times my mind spun its own reality and conclusions.

I had many fears. One of the things I was terrified of was our basement. I thought there were evil clones of my family living there, like in a parallel universe. I was scared to go downstairs alone because of this. Unexplained shadows in my room, at night, became the family from downstairs, paying me an unwanted visit. One time something caught my eye, in the mirror over my dresser— it was my own evil clone 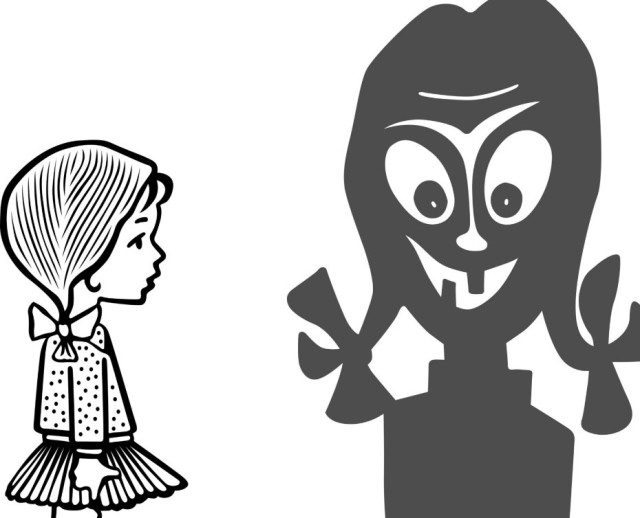 looking back at me. In retrospect, it may have been my reflection.

Then I had another big childhood fear. It started after I saw the movie Jaws. I was convinced that a shark could emerge from the toilet and eat me. I rushed when I went to the bathroom or tried to make my mom come with me and stand guard. Well, that’s what she gets for letting me see Jaws when I was six.

I believed in magic, too. When I went to antique shops with my parents, I would rub anything which resembled a lamp, or an interesting bottle. Yes, I was sure I would eventually find a Genie and of course be granted my three wishes. I also believed there were little people. Why not? It would be cool. But we are probably the little people.

Do you remember anything weird you thought as a kid? Come on, share one with us.